Our task was to control the rudder angle that creates the path of Minesto’s Deep Green underwater kite – a solution that had to be accurate and fast. 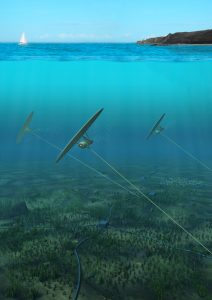 Minesto is an industry spin out of SAAB and at the forefront when it comes to new technology. The company was listed as one of Sweden’s 33 hottest young technology companies in 2013, compiled by the magazines Ny Teknik and Affärsvärlden. Minesto has a technology called Deep Green for harvesting energy from tidal and ocean currents. In the same way that a wind kite moves with the wind to become faster, Minesto’s power plant moves with the currents. It moves in a figure eight and travels ten times faster than the water it is tethered in. The power plant is applicable in areas where no other known technology can operate cost effectively due to its unique ability to operate in low current velocities. The upscaling of Deep Green is ongoing and the technology will be ready for multi megawatt installation in 2015.

“It has been exciting working with Minesto; they are in the forefront of new technology and the cooperation has been very good with an open-minded dialogue. For us, it feels great to be part of building a sustainable future and contribute to the development of renewable energy.” says Leo Flytström, Project Manager at Unjo.

The Task:
Accurate and Precise Motor Control of the Rudder Angle

The underwater kite comprises a wing with a rudder to steer the turbine in the direction that will allow it to capture the maximum amount of tidal energy. For the second generation of prototype, our task was to deliver a motor control to control the rudder angle that creates the path that the underwater kite ”flies”. The main drivers in the project were accuracy, speed and energy consumption.

The challenge:
Limited Space and Time

One challenge was to optimize the drive train with regards to gear ratio and torque requirements. We had to minimize the movement of the rudders, as too much movement would affect the efficiency and also consume more energy. As space and time was limited, it was a requirement to build the solution on an existing motor control platform. We had to ensure high reliability and availability as Deep Green is intended to be tethered to the sea bottom and not easily accessible when in use. 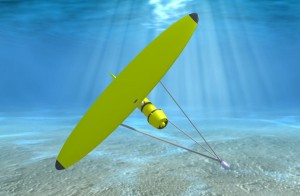 As repeatability and resolution was crucial, the solution was two systems; one master and one slave on a common rudder shaft, to generate maximum torque. The high efficiency in the servo controller gave an energy efficient system with a well-balanced rudder. We were involved in designing and specifying the complete drive system such as motor, sensors, gear ratios and power supply. This included the final system integration work together with the customer to optimize the complete system.

“The system integration has completed successfully with Unjo. They have responded quickly and handled any integration problems or other technical issues simply and quickly.” says Oskar Andreasson, Senior Software Engineer at Minesto.

We also cooperated in defining the communication structure. By communicating via CANopen we improved the observability and diagnostics possibilities of the system. This makes status and parameter adjustments accessible from onshore control.

The Benefit:
One Complete Drive System

We provided a cost efficient solution customized to meet Minesto’s needs and delivered in a short period of time. Our full position feedback system makes it possible for Minesto to optimize the routing of the kite. The implemented communication protocol is scalable and hasa high reusability for coming generations of Deep Green.

“The cooperation with Unjo has worked very well and we have been able to work closely together. They really delivered what we expected.” says Oskar Andreasson, Senior Software Engineer at Minesto.

Why choose Unjo?
We are a long-term partner with an overall system view, optimizing not only our scope of delivery, but addressing the complete system. We like to have an ongoing dialogue and cooperation with the customer in order to create a customized solution. When it comes to energy efficiency we rather turn the energy into motion than heat.

“Unjo is very easy to work with and the project process has gone smoothly. They are responsive and take on feedback quickly. I could definitely see myself working with Unjo again.” says Linus Nordholm, Project Manager at Minesto.

Do you want to know more about our customized solutions? This is How we work and What we do.

No measurable wow and flutter wanted

Visit us at the SPS 2021 exhibition

Visit us at the SPS 2019 exhibition